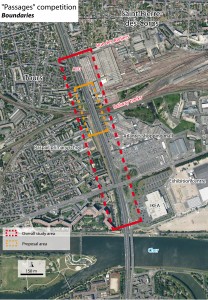 The motorway A10 crosses the city of Tours, carrying national and local traffic. Such use will continue into the future since the idea of a motorway ring road has been abandoned.

The area under consideration is the A10 motorway corridor (consisting of the A10 motorway and Avenue Georges Pompidou) between Tours and St-Pierre-des-Corps, over a section located between Rue des Ateliers and the River Cher. The project includes the motorway and its immediate vicinity as well as its flyovers and underpasses. Teams must take account of the scale of work within a metropolitan and urban context and include the neighbouring urban districts.
They must also take account of uses that should be encouraged, particularly forms of mobility other than private cars (car pooling, public transport etc.).
This means that, in addition to the overall consideration required, the sector at the junction of the motorway and railway is also expecting a specific concept based on Passages.
The proposal should form the basis of a long-term urban redevelopment process.

3 motorway (A10, A28, A85)
8 railway lines
1 TGV line in use (to Paris), in extension to Bordeaux
2 TGV station (Tours and Saint-Pierre-des-Corps)
Loire : river listed as one of UNESCO’s World Heritage sites